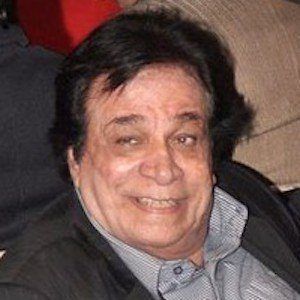 Legendary actor and filmmaker who is known for his roles in Khoon Bhari Maang, Hum, and Muqaddar Ka Sikandar. Throughout his long career, he has starred in over 400 films and written for over 100 more.

After graduating from Ismail Yusuf College, he would spend his early adult years as a professor of civil engineering at M. H. Saboo Siddik College of Engineering, Mumbai.

A prolific screenwriter, he has penned dialogue for popular films like Mr. Natwarlal and Khoon Pasina.

His father, Abdul Rahman Khan, was from Kandahar and his mother, Iqbal Begum, was from Pishin, British India. He had three brothers, Shams ur Rehman, Fazal Rehman and Habib ur Rehman. He married Azra Khan and they had child named Sarfaraz, Shahnawaz, and Quddus.

In 2017, he joined the cast of Poster Boys alongside Sunny and Bobby Deol.

Kader Khan Is A Member Of