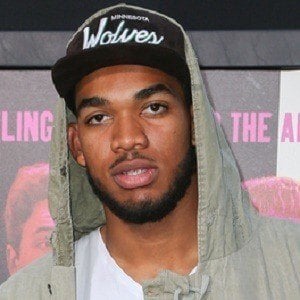 Forward who was named NBA Rookie of the Year in 2016 after being selected first overall in the 2015 NBA Draft by the Minnesota Timberwolves. He made his first NBA All-Star Team in 2018.

At St. Joseph High School, he twice recorded the rare quadruple double, achieving double-digit numbers in points, rebounds, assists, and blocks. He played for the Dominican Republic national team as a sixteen-year-old.

He played one season of college basketball at the University of Kentucky, helping the team win 38 straight games before losing to University of Wisconsin in the Final Four.

He was born to Karl Towns Sr. and Jacqueline Cruz. His father was a basketball player at Monmouth University. He dated model Kawahine Andrade. He subsequently began a relationship with Jordyn Woods.

He was coached by John Calipari on the Dominican Republic national team and at Kentucky.

Karl-Anthony Towns Is A Member Of