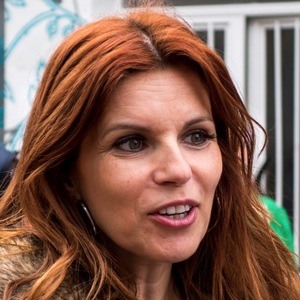 Presenter, announcer, and host of a range of television and radio programs. She is known for announcing several shots on the VRT network. She is best known for hosting the radio show Ultratop 50 as well as the television series The National Test.

She began by studying English to Spanish translation at the VLEKHO in Brussels. She then began working at a production house on IDTV for several years. She became a video jockey at VRT and continued to work as both a broadcaster and presenter for different shows.

She is also a published author who has written several children's book such as Snot and the Paper House.

She was born and raised in Belgium. She married actor Jan Schepens and together they have two daughters and a son.

Gert Verhulst is a fellow television host and presenter also from Belgium.

Katja Retsin Is A Member Of