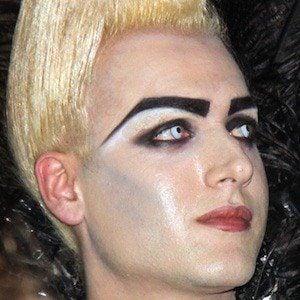 Musician and nightclub performer who became a notorious figure in New York City due to his controversial, highly-sexualized live performances as the leader of the Zand Collective. He has appeared on America's Got Talent and released electronic, 80's-influenced albums like 2014's Just Give It Away.

He grew up with his mother and sister in a single-parent household and learned to speak Persian before English. He worked as a fashion model as a teenager, enabling him to travel around Europe.

His act was banned from the Highline Ballroom in Manhattan in 2010 for being too shocking.

His parents, Tabandeh Zand Ph.D and Hormoze Goudarzi, are Persian.

He played a terrorist in the 2007 film Starrbooty, written by and starring RuPaul.

Kayvon Zand Is A Member Of