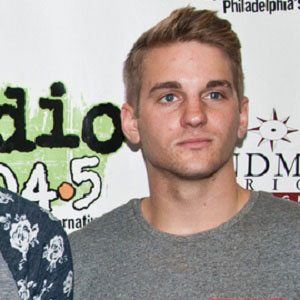 Singer and guitarist most famous as the frontman for the pop-rock band Vinyl Theatre. After earning buzz from their EP's Gold and Chromatic, he and the band were put on Billboard's Next Big Sound Chart and released their debut LP, Electrogram, in 2014.

He started playing guitar when he was 13 years old. He was a high school classmate of future Vinyl Theatre keyboard player Chris Senner. He attended college at Adams State University in Alamosa, Colorado.

He was a star runner in college, winning 3 National titles and becoming an 8-time All American.

He grew up with a sister named Kat.

In 2014 he and his band signed to Fueled By Ramen, the label which signed Paramore, led by singer Hayley Williams.

Keegan Calmes Is A Member Of