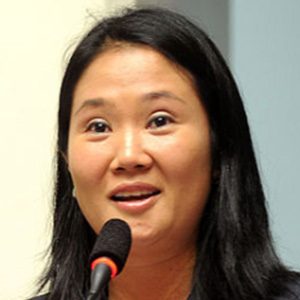 Politician who was elected to the Congress of Peru in 2006. She became the leader of the right wing party Fuerza Popular in 2011, and in 2018 was sentenced to 36 months of preventive prison for criminal activity within her party.

She graduated from Boston University in 1997 with a bachelor's degree in business administration, and from Columbia Business School in 2006 with her master's.

She served as First Lady from 1994 to 2000, making the youngest First Lady in the history of the Americas.

Her parents are Alberto Fujimori and Susana Higuchi. She and her husband Mark Villanella have children Kyara Sofia and Kaori Marcela.

Keiko Fujimori Is A Member Of