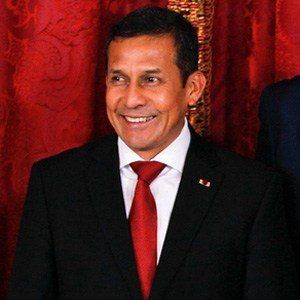 Peruvian politician who was elected the President of his nation in 2011 after he won an election run-off against Keiko Fujimori. He founded the Peruvian Nationalist Party in 2005.

He became a Lieutenant Colonel in the Peruvian Army in 1992.

In October 2000, he led an unsuccessful military revolt by 39 soldiers in the southern city of Tacna against President Alberto Fujimori but was pardoned by the Peruvian Congress.

He married Nadine Heredia in 1999. He has three kids named Samin, Nayra and Illariy Humala. His brother Ulises ran against him in the 2006 Presidential election.

He and Simon Bolivar were both military leaders who later became President of Peru.

Ollanta Humala Is A Member Of