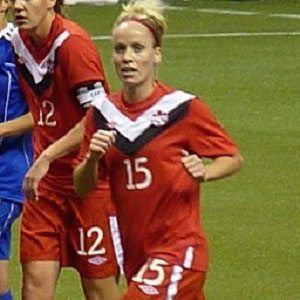 Midfielder who first represented Canada in 2003 and made her professional debut with Ottawa Fury that same year.

She played collegiate soccer for the UTEP Miners.

She was born in Regina, Saskatchewan, Canada.

She became teammates with attacking midfielder Christine Sinclair on Canada in 2003.

Kelly Parker Is A Member Of