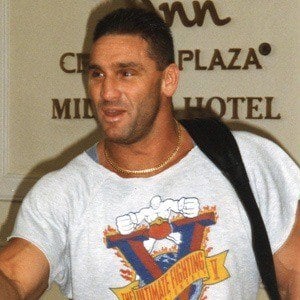 MMA legend who fought in 45 bouts and earned the nickname The World's Most Dangerous Man in his 17-year career.

He continued his wrestling career despite breaking his neck during his senior high school season.

He became the first member to be inducted in the UFC Hall of Fame and also the first fighter to ever defend a title in the promotion.

He got married to second wife Tonya Shamrock in 2005, and has three step children from the relationship, as well as four children from his first marriage.

He was the first WWF wrestler to popularize the ankle lock, which was later adopted as a favorite by Kurt Angle .

Ken Shamrock Is A Member Of