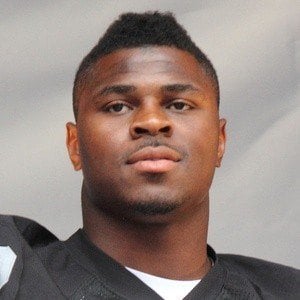 Outside linebacker who was selected fifth overall by the Oakland Raiders in the 2014 NFL Draft out of the University of Buffalo. In 2018, he was traded to the Chicago Bears. He was named AP Defensive Player of the Year in 2016.

He played high school football at Fort Pierce Westwood High School, but received his only scholarship offer from Buffalo.

He was born and raised in Fort Pierce, Florida. He has a brother named LeDarius who accepted a scholarship offer to play football at Buffalo in 2017. He began dating model Jehona Dreshaj. He had a child named Deuce with his new partner, Brianna Perry, in late 2021.

He and Derek Carr, two key pieces of Oakland's resurgence in the mid-2010s, were both selected by the Raiders in the 2014 NFL Draft.

Khalil Mack Is A Member Of