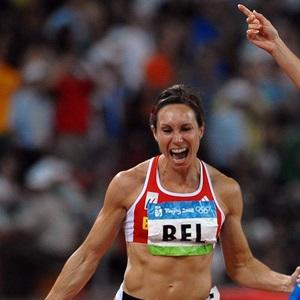 Sprinter who won a silver medal in the 4x100 meter relay at the 2008 Summer Olympics in Beijing.

She made her first notable international appearance in 1999, when she won a gold medal in the 200 meter sprint at Summer Universiade.

She made the podium in the 60 meter sprint at the Indoor World Championships twice: silver in 2004, and bronze in 2006.

She was born in Leuven, Belgium.

She missed out on gold at the 2004 World Championships when she lost to Gail Devers by just 0.04 seconds.

Kim Gevaert Is A Member Of