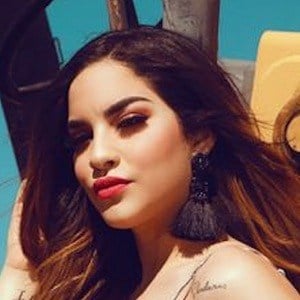 Social media star who has earned more than 35 million YouTube subscribers through a collection of tutorials, tags, and challenge videos on her self-titled channel. She became the most-followed Spanish-speaking TikTok personality with over 60 million fans. As an aspiring singer, she's released original songs like "No Seas Celoso," "Enamorarme" and "Me Perdiste."

She's also widely known on Instagram where she's commanded over 34 million followers. In 2019, she won a Tú award for Coolest Female Influencer. In November 2020, she launched her own mobile phone company, Space, with Juan de Dios Pantoja.

Her full name is Kimberly Guadalupe Loaiza Martínez. She was born in Mexicali but at the age of nine, she moved to Mazatlán, Sinaloa. She has younger siblings named Carlos and Stefanny. She was legally married to fellow YouTuber Juan De Dios Pantoja from 2016 to 2018. They got remarried in August 2020. In July 2019, she and Juan welcomed a daughter named Kima. Their second child arrived in February 2021.

In July 2020, she posted a series of TikToks featuring fellow social media stars JeanCarlo León and Libardo Isaza.  She is a former member of the influencer group Fénix Team.

Kimberly Loaiza Is A Member Of