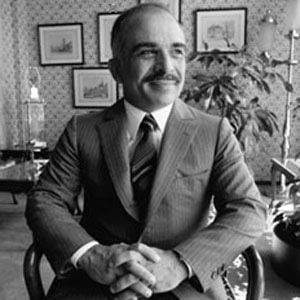 Jordan's ruler from 1953 to 1999 who is credited with modernizing his country. He became the second Arab Head of State to recognize Israel in 1994 and years later he was invited to give a speech during the funeral of Israeli Prime Minister Yitzhak Rabin.

He survived an assassination attempt while attending a mosque in Jerusalem with his grandfather at age 15.

He was a trained aircraft pilot and would fly helicopters as a hobby.

His parents were Talal I bin Abdullah and Princess Zein al-Sharaf Talal.

He was at the Summit of the Peacemakers with politicians like Bill Clinton.

King Hussein of Jordan Is A Member Of