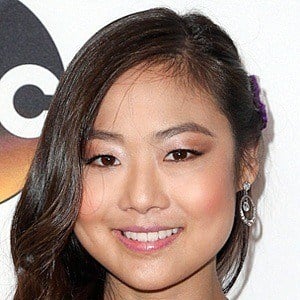 Asian-American actress notable for her role as Molly on the ABC sitcom Dr. Ken. She has been a guest on television series that include The Thundermans, Agent Carter, Switched at Birth, The Middle, and Cougar Town. She has been featured in the major motion pictures The Darkness and Love the Coopers.

She was very into ice skating growing up and aspired to be an Olympian. She performed as part of a song-and-dance troupe called Showbiz.

She graduated from the acting program at Carnegie Mellon University.

She landed the role of Ken Jeong's television daughter in Dr. Ken.

Krista Marie Yu Is A Member Of