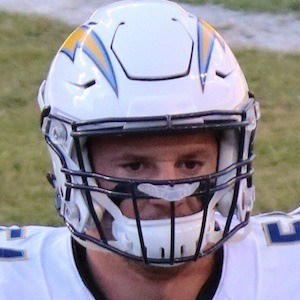 NFL linebacker who was a fifth round pick of the San Diego Chargers in 2015. He played college football at North Dakota State University.

After redshirting his freshman year, he was a four-year starter at defensive end. He had 19.5 of his 35.5 careers sacks as a senior.

In 2014, he won the Buck Buchanan Award for best defensive player in the FCS.

He was born to John and Jeanine Emanuel and grew up with three siblings, Phil, Emily, and Gina.

He was teammates with Carson Wentz at North Dakota State.

Kyle Emanuel Is A Member Of