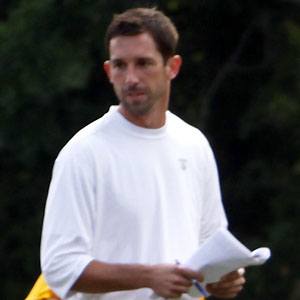 NFL coach who took over as head coach of the San Francisco 49ers in 2017 and helped lead the team to Super Bowl LIV in 2020. Before his time in San Francisco, he served as offensive coordinator of the Houston Texans, Washington Redskins, Cleveland Browns and Atlanta Falcons.

He won a scholarship at Duke University before transferring to the University of Texas Austin.

He became the youngest coordinator ever in the NFL in January 2008. He was named AP Assistant Coach of the Year in 2016-17.

In Washington, he worked under his father, Mike Shanahan, who served as head coach of the Redskins. He married his wife Mandy in 2005.

He was on a Texas Longhorns team with future NFL player Roy Williams.

Kyle Shanahan Is A Member Of