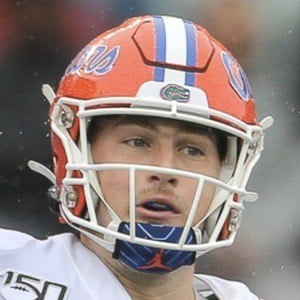 Quarterback who found success during his redshirt junior season in 2019 as the starter for the Florida Gators. He led the Gators to a top 10 ranking consistently throughout the 2019 season.

He was a back-up quarterback during his high school career playing at Manvel High School in Manvel, Texas. He committed to play Division I college football with Florida in July 2015.

He was profiled in USA Today in October 2019. He came out in support of the Pay for Play legislation passed in California in 2019.

His mom's name is Melissa.

He played against Joe Burrow and the LSU Tigers during the 2019 NCAA season.

Kyle Trask Is A Member Of