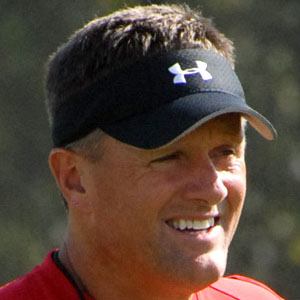 College football coach known for his two-decade stint with the University Utah Utes. In 2008, he won both the AFCA Coach of the Year and the Paul "Bear" Bryant Award after leading Utah to an undefeated regular season.

He was a linebacker for the BYU Cougars in the late 70's and early 80's. He went on to play for teams in the CFL and the short-lived USFL.

He was named WAC Defensive Player of the Year in his senior season at BYU.

His father, Fred Whittingham, is a nine-year NFL veteran who played linebacker for teams like the New Orleans Saints.

Kyle Whittingham Is A Member Of