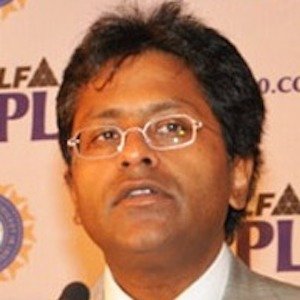 Business executive who became the first ever Chairman and Commissioner of cricket's Indian Premier League. He successfully headed up the tournament from 2008-10. Previously, he was the Chairman of the Champions League.

He studied electrical engineering and business administration at Pace and Duke Universities.

In 2010, Sports Illustrated named him the 2nd Most Powerful Person in Indian Sports.

His father Krishan is a successful entrepreneur and his mother's name is Bina.

He became a wealthy Indian business tycoon like Azim Premji and Ramalinga Raju.

Lalit Modi Is A Member Of