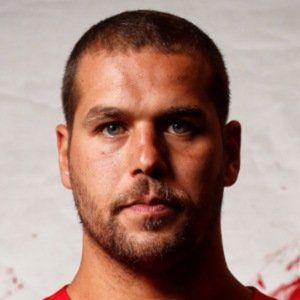 Australian rules footballer who played forward for Hawthorn and the 2008 Australian Dream Team. He later joined the Sydney Swans in 2014.

He was selected with the second pick by Hawthorn in the 2004 AFL Draft and immediately showed talent, scoring 27 goals in his first 20 games.

He was a six-time leading goalscorer for Hawthorn and made the All-Australian team three consecutive years from 2010 to 2012.

His father played competitive field hockey, and his older sister Bianca Giteau played ANZ Championship netball. In 2015, he got engaged to Jesinta Campbell. They got married in 2016. Their daughter Tullulah was born in February 2020.

He was ranked the 12th highest goalkicker in VFL/AFL history behind leading scorer Tony Lockett.

Lance Franklin Is A Member Of