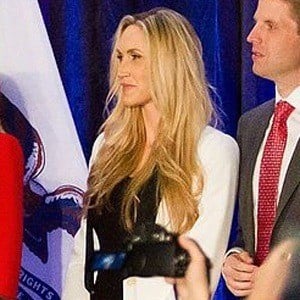 Best known as the wife of businessman Eric Trump and daughter-in-law of Donald Trump. She has been a producer on the CBS show Inside Edition and has also been on the board of directors for the Eric Trump Foundation.

She majored in communication media from the North Carolina State University in 2005. She also earned a degree in pastry arts and worked as a personal trainer.

She is an animal welfare advocate and volunteers at the North Shore Animal League American, which is the world's largest no-kill animal rescue organization.

She is originally from Wilmington, North Carolina but has also lived in New York. She dated Eric Trump for six years before marrying him in 2014. She and Eric welcomed their first child, a son named Eric Luke Trump, in September 2017. They later had a daughter named Carolina in August 2019.

Her mother-in-law is Melania Trump.

Lara Trump Is A Member Of