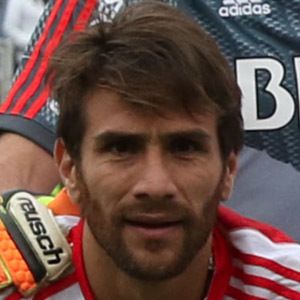 Argentine professional football player who is known for his work with Club Atletico River Plate as a defensive midfielder. He is also known for having played as a midfielder on the Argentina national team as well.

He started his youth career playing for the Newell's Old Boys club. He then made his senior career debut in 2000 for the club before joining Zaragoza during the 2003 season. That same year he also started his career with the Argentina national team.

He has won several awards and honors for his playing including the Copa Del Rey in 2003 as part of the Zaragoza club and the FIFA Under 20 World Cup in 2001 as part of Argentina's national team.

He was born and raised in Las Rosas, Argentina.

Other players on the Argentina national team also known for having played as a defensive midfielder include Matías Jesús Almeyda and Javier Mascherano.

Leonardo Ponzio Is A Member Of