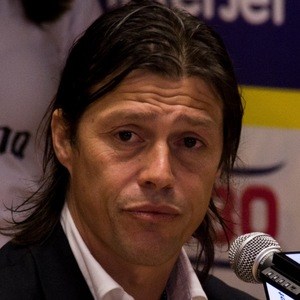 Former defensive midfielder nicknamed "El Pelado" who represented Argentina for a decade and played in two FIFA World Cups. He spent the majority of his career with River Plate, with whom he won three Argentine Primera División titles.

He began his River Plate career as an understudy to Leonardo Astrada. He made his senior debut with the club in 1991..

Following his retirement from playing, he became the manager of clubs like Guadalajara and Banfield.

He married Luciana Garcia Pena and has a daughter named Sofia.

He was teammates with Mauricio Pochettino on the Argentinian national team.

Matías Jesús Almeyda Is A Member Of