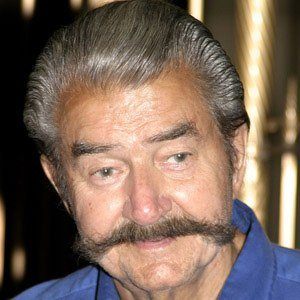 Expressionist painter known for his brightly colored screen prints of musicians and athletes. He worked for Playboy Magazine for five decades, creating the Femlin character on the Party Jokes page.

He served in the United States Army during World War II, where he frequently painted sets for Red Cross performances. He used the G.I. Bill to attend the School of The Art Institute of Chicago. He was hired by Playboy in 1954.

He created numerous paintings based on the Super Bowl, the Olympics, the World Series, and other sporting events.

He was born of Swedish ancestry; he rejected his original surname, Runquist, after his father abandoned the family. He adopted his stepfather's surname instead. He married Janet Byrne in 1957.

He met Hugh Hefner when they both worked for the Carson Pirie Scott department store chain.

Leroy Neiman Is A Member Of