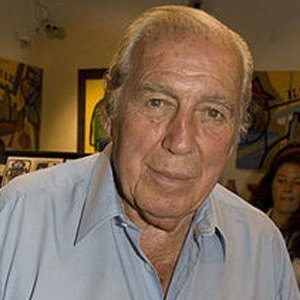 Abstract artist who became known for his multimedia work as a potter, painter, sculptor, muralist, writer, composer, and conductor. His "Roots of Peace" mural was commissioned by the Organization of American States in Washington, D.C., in 1959.

He worked as a printing apprentice in Buenos Aires after discovering an interest in drawing in 1939. He was interested in Afro-Uruguayan culture and settled in Mediomundo, Montevideo's black neighborhood.

He believed that his best work was created for the San Isidro Chapel.

He was married to Madelón Rodríguez Gómez, with whom he had three children.

He and Christian Rauch were both gifted sculptors.

Carlos Paez Vilaro Is A Member Of