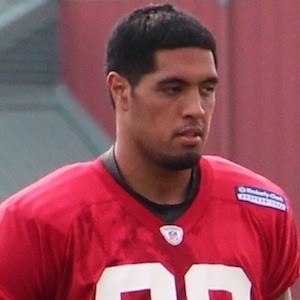 NFL tight end who was selected in the fourth round of the 2013 NFL Draft by the Atlanta Falcons after spending four years at Stanford University.

He attended Helix High School in La Mesa, California where he played football for the Helix Highlanders.

Though born in San Diego, California, he was later raised in La Mesa. He tied the knot with longtime girlfriend Stephanie Ming in 2017.

He became a member of the Atlanta Falcons alongside quarterback Matt Ryan and wide receiver Julio Jones.

Levine Toilolo Is A Member Of