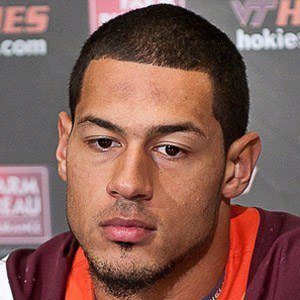 Starting quarterback for Virginia Tech from 2011 to 2013, he was named Second-Team All-ACC in 2011. The Arizona Cardinals selected him 120th overall in the 2014 NFL Draft.

He played quarterback, defensive back and receiver at Brookville High School in Campbell County, Virginia, where he was also a track and field star.

In his first year as a starter at Virginia Tech, he threw for 3,013 yards and 19 touchdowns while adding 469 rushing yards and 11 rushing touchdowns.

He was born in Lynchburg, Virginia.

He became starting quarterback at Virginia Tech after Tyrod Taylor graduated and was drafted into the NFL.

Logan Thomas Is A Member Of