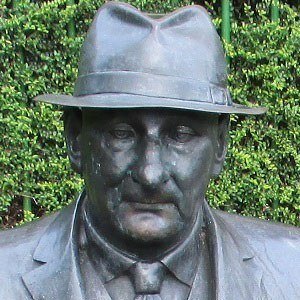 Remembered for his urban scenes featuring simply drawn human figures ("matchstick men") and for his portraits, he is most well known for Industrial Landscape (1955); Portrait of Ann (1957); Going to the Match (1928); and Coming from the Mill (1930).

In the early 1900s, he studied under Impressionist painter Pierre Adolphe Valette at the Manchester School of Art and received further artistic training at the Salford Royal Technical College.

In the 1950s, he began mentoring the young English landscape artist Sheila Fell.

Raised in Lancashire, England, Laurence Stephen "L.S." Lowry had an unhappy childhood as the son of Elizabeth and Robert Lowry. His parents were, by most accounts, highly neurotic and emotionally cold.

Brazil, a 1985 fantasy movie directed by American-born filmmaker Terry Gilliam, features a main character named Sam Lowry and is filled with urban landscapes reminiscent of those in Lowry's paintings.

LS Lowry Is A Member Of