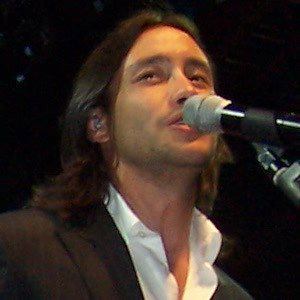 Latin pop singer who rocketed to fame in the late 1990s after his single "Soy un inconsciente" went quadruple platinum. He has since released several successful albums including 2015's Tu Mano.

He was only three years old when his parents noticed his musical talent and bought him a guitar for Christmas. By the age of nine he was performing on the children's show Festilindo.

Dabbling in acting, he appeared in the 2003 film Tus ojos brillaban.

He was born to Juan Ángel Pereyra and Ángela Gutkoski in Lujan, Argentina.

In 2015, he released the single "Enséñame A Vivir Sin Ti" which featured Paty Cantu.

Luciano Pereyra Is A Member Of