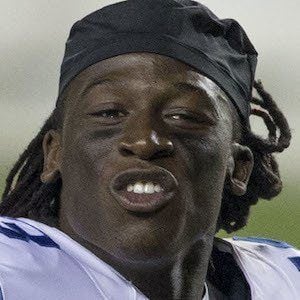 American football wide receiver and kick returner who signed with the Dallas Cowboys as an undrafted free agent in 2015. While he only had six catches his rookie season, he made his impact on special teams by averaging more than 28 yards per kick return.

After being named an All-American at Dean College, he transferred to Florida Atlantic University where he lead Conference USA in receptions as a senior.

After the end of the NFL regular season, he flew straight home and posted a video on Instagram of him surprising his mother by showing up at her work on her birthday.

His given is Rodney, as is his father's. His mother is Karen Morris.

He and Lance Dunbar both handled kick return duties for the Cowboys in 2015, although the latter's season was ended prematurely due to injury.

Lucky Whitehead Is A Member Of