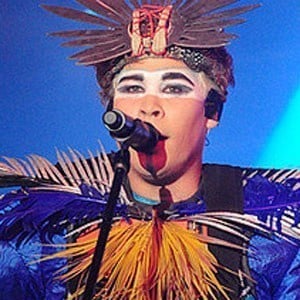 One-half of the electronic duo Empire of the Sun, the group known for the hit album Walking on a Dream, who also founded the alternative rock band The Sleepy Jackson.

He formed The Sleepy Jackson in 1998 and, on the verge of a record deal with EMI, his bandmates quit, forcing him to reform the group from scratch.

He met the other member of Empire of the Sun in 2000 in a bar in Sydney and the two immediately decided to embark on a music project together.

He has two brothers and a sister, all of whom are musicians. He and his fiancee, Jodi, welcomed a daughter in 2008 named Sunny Tiger.

He has cited Cole Porter, Kill And The Gang, and The Cure among his musical influences.

Luke Steele Is A Member Of