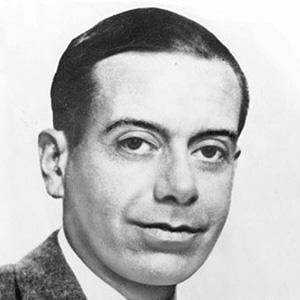 Songwriter and winner of the 1948 Tony Award for Best Musical for Kiss Me, Kate. He wrote such American musical theater and popular standards as "Night and Day," "I Get a Kick Out of You," and "I've Got You Under My Skin."

He wrote an operetta, albeit with his mother's help, when he was just ten years old.

Many of his hit songs, including "Well, Did You Evah!" and "You're the Top," were performed by such legendary vocalists as Judy Garland, Ella Fitzgerald, and Frank Sinatra.

Despite being a homosexual, he married Linda Lee Thomas in 1919. Thomas was at peace with Porter's homosexuality and was willing to provide him cover during an extremely homophobic age due to the fact that he treated her much better than her first husband had.

He was played by Kevin Kline in the 2004 biopic De-Lovely.

Cole Porter Is A Member Of