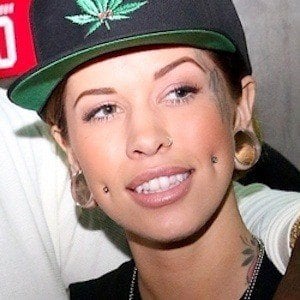 Model known for wide array of tattoos, stretched ears, and dimple piercings, as well as for smoking copious amounts of marijuana. She's worked with photographer Van Styles and has appeared in several music videos.

She bounced around from state to state growing up and has worked in restaurants and as a stripper.

She has interest in creating music and has worked as a DJ. She has more than 550,000 followers on Instagram. Her nickname is Madzilla.

Growing up, both of her parents struggled with alcoholism and drug addiction, which ultimately took their lives. She's from a Native American, Italian, Irish, and French background.

She was featured in the 2011 music video for Snoop Dogg and Wiz Khalifa's song "French Inhale."

Madelyn Lance Is A Member Of