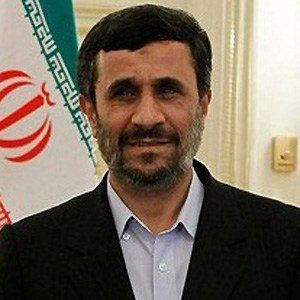 Iranian politician who was the sixth President of Iran from 2005 to 2013 whose regime was openly hostile to the western world. He has been accused internationally of violating human rights and for expanding his country's nuclear program. In 2017, he announced his campaign for a third term.

He had his name changed when his family moved to Tehran as to avoid discrimination for coming from a rural area.

As President of Iran, he often made hostile statements towards nearby Israel and was accused of claiming that the Holocaust was a myth.

He married Azam Farahi in 1981, and the couple have three children together.

He claimed that Ayatollah Khomeini was his spiritual mentor.

Mahmoud Ahmadinejad Is A Member Of