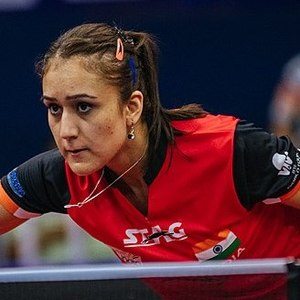 Professional table tennis player who is known for competing in the Asian Games, Commonwealth Games, and South Asian Games as a member of the India Women's national team. She competes in the mixed doubles and women's singles categories.

She first started playing table tennis at the age of four. She began earning recognition when she won a state level tournament in the under 8 category. She began studying at the Jesus and Mary College before dropping out to focus on table tennis. She then won the Chile Open in the under 21 category in 2011.

She was featured on the cover of Femina magazine in July of 2018. She is also known for having won the gold medal in both the Women's team and Women's singles events at the 2018 Commonwealth Games at the Gold Coast.

She was born and raised in Delhi, India and was the youngest of three children.

Poulomi Ghatak is a fellow table tennis player who is also from India known for competing in the Commonwealth Games.

Manika Batra Is A Member Of