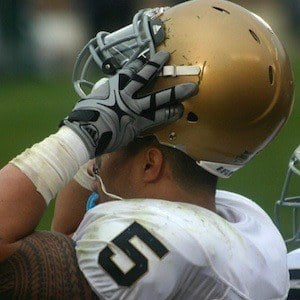 NFL linebacker who was selected in the second round of the 2013 NFL Draft by the San Diego Chargers. He joined the New Orleans Saints in 2017.

He played football college at Notre Dame from 2009-2012, where he became one of the most decorated college football players of all time, including eight national awards.

His senior year of college, he gained media attention for his infamous dead girlfriend hoax, where he made up a story about a fake girlfriend.

He was raised with one brother, Manasseh, and four sisters named BrieAnne, Tiare, Eden and Maya.

He and Brady Quinn both played college football at Notre Dame.

Manti Te'o Is A Member Of