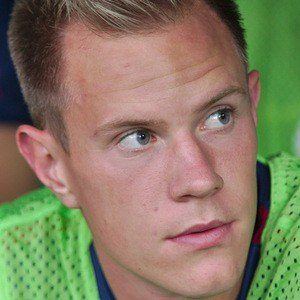 German goalkeeper who has played for the Spanish club team Barcelona. He was on the winning team of the European Under-17 Championship in the 2008-2009 season. He made his international debut for Germany in 2012.

He started his youth career for German youth league Borussia Mönchengladbach in 1996.

He won a treble his first season playing for Barcelona in 2014.

He was born in Mönchengladbach, Germany. He played soccer at several youth levels growing up.

He took over as the new goalkeeper of Barcelona after the departure of Victor Vlades.

Marc Ter Stegen Is A Member Of