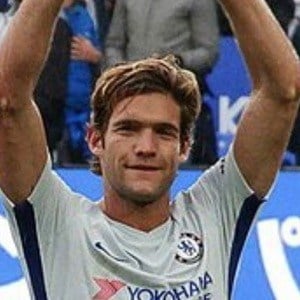 Spanish defenseman who is famous for his international club career, including for Real Madrid and ACF Fiorentina. In August 2016, he signed with Premier League club Chelsea FC to be a primarily attacking wing back.

He began his youth career in Real Madrid's youth academy. He would later make his professional debut for Real Madrid B in 2008, and Real Madrid's primary squad in 2010.

He helped contribute consistently en route to Chelsea's 2016-2017 Premier League title. He also finished as an FA Cup runner-up in 2016-2017 as a primary wing back for Chelsea.

He and Antonio Rudiger played defense for Chelsea during their 2016-2017 Premier League title year.

Marcos Alonso Mendoza Is A Member Of