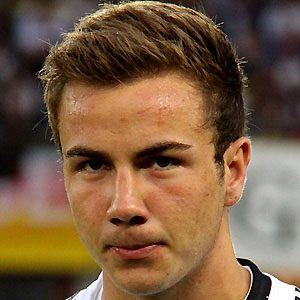 Attacking midfielder who lifted the German national team to a World Cup title in 2014 with his goal in the 113th minute of the championship game against Argentina. He helped Borussia Dortmund win Bundesliga titles in 2011 and 2012 and won three more league titles with Bayern Munich in 2014, 2015 and 2016.

He began his youth career with Borussia Dortmund in 2001, at age nine.

He won the Golden Boy Award in 2011, given to the top European player under 21.

His brother Fabian became a professional soccer player as well. He married Ann-Kathrin Brommel in 2018.

He became teammates with Toni Kroos on Germany's national team in 2010.

Mario Götze Is A Member Of