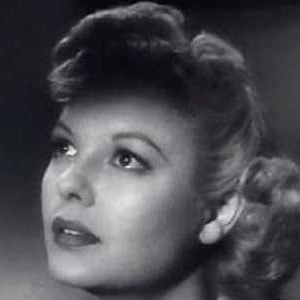 Best remembered for her role as Linda Mason in the 1942 Paramount Pictures musical movie Holiday Inn, this actress also starred in Up in Mabel's Room, The Time of Their Lives, and Ministry of Fear. Over the course of her career, she appeared in more than four dozen films.

When she was just six years old, she acted in a 1923 silent film titled Scaramouche. At the age of twenty, she was cast in a speaking role in the 1937 movie Murder in Greenwich Village.

In the 1950s and 1960s, she appeared on television in both The Life of Riley and Leave It to Beaver.

She was born in Buhl, Idaho, and raised primarily in California. Her first marriage, to Jack Reynolds, lasted a decade and a half and produced one child; her second marriage, to John Whitney, began in 1953 and ended with Whitney's death in 1985.

She and Mario Lanza were both in the cast of the 1949 film That Midnight Kiss.

Marjorie Reynolds Is A Member Of