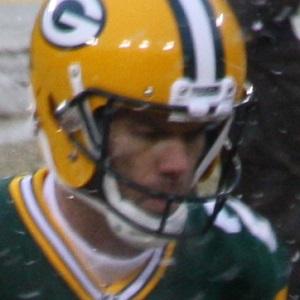 NFL placekicker who was the NFL points leader during his rookie 2007 season with the Green Bay Packers. In 2016, he signed a four-year contract extension with the team.

He was a two-time All-American kicker at the University of Colorado.

He broke a Green Bay Packers team record with a 58-yard field goal in 2011.

He married Molly Ackerman in 2008; the couple has a son named Nolan and a daughter named Charlotte.

He won Super Bowl XLV with teammate Aaron Rodgers in 2011.

Mason Crosby Is A Member Of