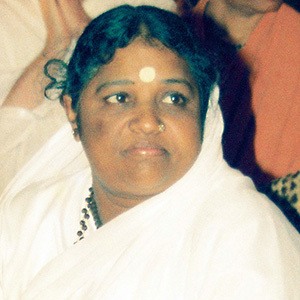 Known as Amma, she is a spiritual leader and guru of the Hindu faith who is known as a saint among her followers. She is also known for her charity work where her organizations provide food, housing, education, and medical services for a variety of underprivileged people.

After gaining reputation for her helpfulness throughout her community, she founded the Mata Amrtanandamay Math which focused on charitable and spiritual activities. She gained further recognition after helping with the Tsunami relief after the 2004 Indian Ocean earthquake and again in 2015 when she donated to help clean the Ganges River.

In 2014 she joined a variety of different religious leaders and signed a shared commitment by the Global Freedom Network to end slavery and human trafficking by the year 2020.

Her parents were Sugunanandan and Damayanti and she has six siblings.

She was the subject of the Shekhar Kapur documentary film Science of Compassion in 2016.

Mata Amritanandamayi Is A Member Of