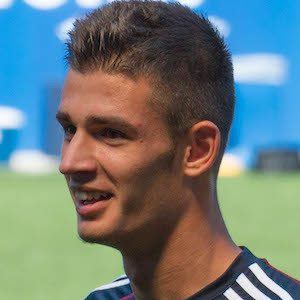 Soccer player who made his senior debut with the New York Red Bulls in 2013 up until 2016 when he joined English Premier League club Chelsea. He has also played in the youth programs of the Polish and US national teams.

In 2009, at the age of 14, he joined the New York Red Bulls Academy in their Under-14 program. In 2012, he helped the Red Bulls U-16 team win the U.S. Developmental Academy National Championship.

In 2012, he played 1 match for Poland's U-18 team. Subsequently, through 2015, he has exclusively played for the US National Team's youth and, beginning in November of that year, professional programs.

He was born and raised in Clifton, New Jersey to parents Adam and Elzbieta.

He has played defender alongside Connor Lade during the New York Red Bulls' 2015 season.

Matt Miazga Is A Member Of