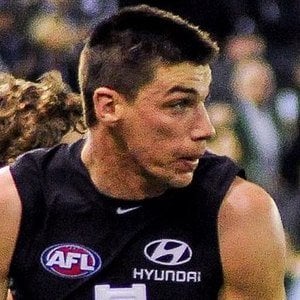 Australian rules footballer who was taken by the Carlton Football Club with the first overall pick in the 2007 AFL draft. In 2008, he won the Carlton FC Best First Year Player Award and was an AFL Rising Star nominee.

He played junior football for St Mary's Greensborough and the Bundoora Football Club.

He was a member of the Northern Knights teams when they were named TAC Cup Team of the Year in 2006 and 2007.

His parents are Frank and Margaret Kreuzer.

He and Tom Scully are both former number one overall picks in the AFL Draft.

Matthew Kreuzer Is A Member Of