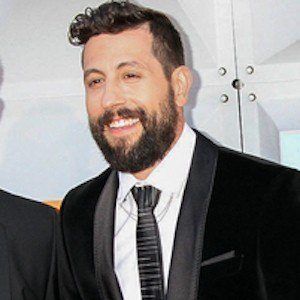 Lead vocalist and primary songwriter for the country music band Old Dominion that released a 2014 self-titled EP and 2015 LP called Meat and Candy.

His first instrument was the drums. He then learned to play the guitar when he was 14 years old. He graduated from Virginia Commonwealth University with a degree in illustration.

He has written notable songs for other artists, including "Chainsaw" by The Band Perry, "Goodbye Girl" by Luke Bryan, "Wake Up Lovin' You" by Craig Morgan, "Say You Do" by Dierks Bentley and "Save It for a Rainy Day" by Kenny Chesney.

He has two daughters with his wife. They reside in Nashville, Tennessee as a family.

He wrote the two songs "Ex to See" and "Make You Miss Me" from Sam Hunt's album Montevallo.

Matthew Ramsey Is A Member Of