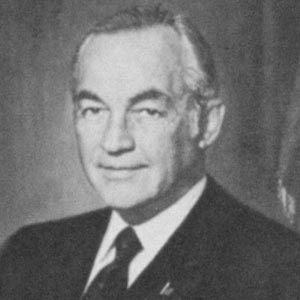 Commerce secretary during Richard Nixon's first term who became the finance chairman of his re-election committee and got involved in the Watergate scandal.

He was an executive partner at a Chicago accounting film for 15 years before his appointment to Deputy Postmaster, and then director of Bureau of the Budget in 1958.

He raised nearly $60 million for Nixon's re-election but maintain he had no knowledge of the Watergate burglaries, and was ultimately acquitted of all charges.

He grew up in Shakopee, Minnesota.

After Richard Nixon's resignation, he wrote the book The Terrors of Justice: The Untold Side of Watergate, in which he laid out his side of the story.

Maurice Stans Is A Member Of