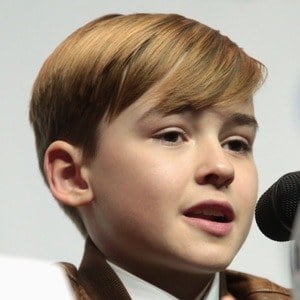 Actor who is widely known for his role as a young Will on the Netflix original sci-fi series Sense8. He rose to prominence for his portrayal of Oliver on the ABC drama series Betrayal between 2012 and 2014. In 2018, he began starring as Will Robinson in Lost in Space.

He earned his first major TV credit upon debuting as Oliver on ABC's Betrayal. He first appeared during the series' pilot episode in 2012.

He starred in the 2016 drama film A Family Man alongside Gerard Butler.

He has one sister named Samantha. His father, Jeff Jenkins, is a former Ringling clown; together, he and his mother, Julie, co-founded the Chicago based Midnight Circus.

He appeared as the younger iteration of Jorma Taccone's character Owen in the 2016 comedy Popstar: Never Stop Never Stopping.

Maxwell Jenkins Is A Member Of