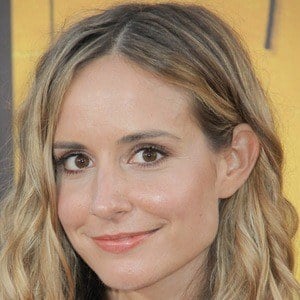 American screenwriter who is known for having penned scripts both for television and for film. She is best recognized for having created and written the 2018 web series Queen America as well as the 2015 film We Are Your Friends.

She originally graduated from Holland Hall and went on to attend NYU's Tisch School of the Arts where she graduated in 2009. She then moved to Los Angeles to pursue her career as a writer and debuted with the short film Hot Mess in 2010.

She is also an actress and is recognized for her recurring role in the 2011 television series stalkTALK.

She was born and raised in Tulsa, Oklahoma and shared a photo with her husband Tom through Instagram in February of 2019.

She collaborated with Reese Witherspoon on a drama series for ABC Please Don't Go. She also worked with Zac Efron on the 2015 film We Are Your Friends.

Meaghan Oppenheimer Is A Member Of