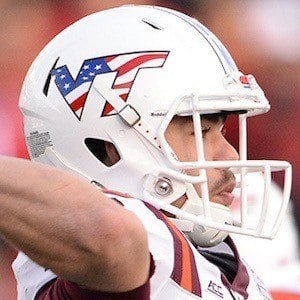 Football quarterback who served as the starter for the Virginia Tech Hokies between 2014 and 2015 before a broken collarbone sidelined him for the majority of the 2015-2016 season.

He began his collegiate career at Texas Tech University as a quarterback. Following the 2013 season, he transferred to Virginia Tech.

He became only the second Virginia Tech quarterback to win back-to-back bowl games in 2016. He won the Military Bowl in 2014 against Cincinnati, and the Independence Bowl in 2015 against Tulsa.

He was born and raised in Austin, Texas. His father, Robert, played quarterback for the University of Texas Longhorns team.

Michael Brewer Is A Member Of