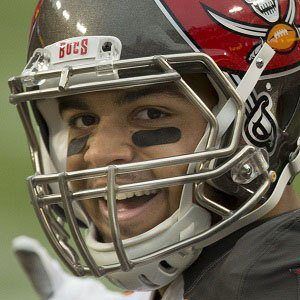 Wide receiver who was selected seventh overall by the Tampa Bay Buccaneers in the 2014 NFL Draft. He racked up over 1,000 receiving yards in each of his first three NFL seasons, including a monstrous 96-catch, 1,321-yard, 12-touchdown campaign in 2016. He helped the Buccaneers win Super Bowl LV in 2021.

He played both football and basketball at Ball High School in Galveston, Texas.

He was a consensus All-American in 2013, his sophomore year at Texas A&M, setting a school record with 1,394 yards on only 69 receptions.

He caught passes thrown by 2012 Heisman Trophy winner Johnny Manziel in both of his years at Texas A&M.

Mike Evans Is A Member Of